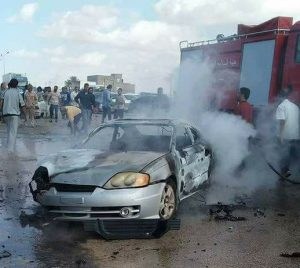 One of the vehicles damaged in today’s Benghazi explosion (Photo: social media)

Gaem’s motorcade was passing a restaurant in the city’s Sidi Khalifa district when there was a large explosion.  Six members of his party were wounded along with an Egyptian member of staff in the restaurant.

Gaem, who was appointed to the interior ministry this September by Presidency Council (PC) head Faiez Serra, is a member of the Awagir tribe, which is dominant in the Benghazi area. His nomination was greeted with fury by Libyan National Army (LNA) commander-in-chief Khalifa Hafter who ordered all local officials and security forces to ignore any instructions he issued.

During the Revolution Gaem was an important Benghazi militia leader. When Hafter launched his Dignity (Karama) operation against Islamist militants in the city,  Gaem joined him. However, the relationship was ruptured after the-then LNA spokesman Colonel Mohamed Hejazi accused Hafter and his family of corruption.

In what was seen as a direct challenge to Hafter, soon after his appointment to the GNA’s interior ministry was announced, Gaem flew from Tunis into Benghazi where he was greeted by armed members of his tribe who had forced their way onto the apron of Benina’s recently-opened airport. 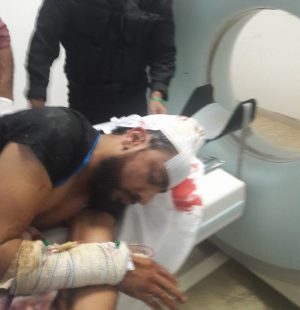 One of Gaem’s wounded guards being treated (Photo: social media)

It is unclear how much time Gaem has since spent in his home city. Shortly after today’s attack he told Libya News TV that he was in good health and had not been injured though four of his men had been wounded.