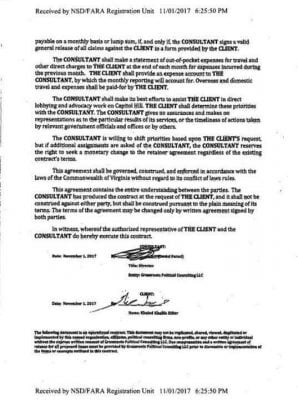 The son of Khalifa Hafter, the general commander of the Libyan National Army (LNA), has signed a six-month contract worth $20,000 a month, to lobby in Washington on behalf of his father.

The contract is attached to the Foreign Agents Registration Unit (FARA) declaration submitted by Faraci. Also dated 1 November and giving Khaled Hafter’s address as 628 Dubai Street, Benghazi, this states that Grassroots will “provide political and strategic advocacy in the US Congress”, officially on behalf of the Hafter family. However, it also states that it will give “political, strategic, business guidance to General Hifter”.

It further says that “support will be sought for the role of the Hifter [sic] family in the future political, military and strategic interests of Libya”.

Khaled is described as a “captain (military officer) who serves under the command and direction of the Commander and Chief of the Libyan National Army (LNA), General Khalifa Hifter”.