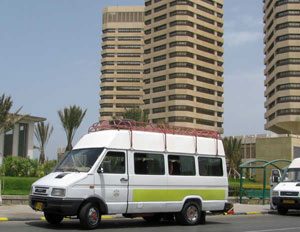 Tripoli is to have up to 90 busses running services throughout the metropolitan area.

Tripoli mayor Abdulrauf Beitelmal told the Libya Herald that planning for the project began over a year ago. According to the Presidency Council two separate transport operating companies are being formed, one in the capital with a mirror organisation in Benghazi. The PC has not release details of the latter company.

Beietelmal said that the project in Tripoli was still in its early stages and did not say when the first busses were likely to appear in capital nor which routes would be served.

Besides taxis, people in Tripoli currently get around using crowded and often chaotic mini-busses, sometimes called “Ivecos”. In high summer, these are not always comfortable. Moreover. there have been complaints from women that they have been sexually assaulted when crammed into one of these vehicles.

It is not yet clear what budget will be given the two bus operating companies nor what equipment they will buy. However, among the likely candidates to supply the vehicles will be Turkish firms Otokar and TEMSA.