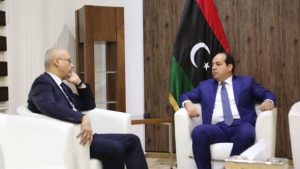 Disruption to the work on Obari’s new power station in the wake of the kidnapping of four foreign workers, could lead to power cuts, the Turkish ambassador to Libya has warned.

Ahmet Dogan told Presidency Council (PC) deputy head Ahmed Maetig he regretted the abduction of three Turks and a South African shortly after they had arrived at Obari airport to start work on the Turkish-built 640MW power station.

According to a statement put out by the PC after today’s Tripoli meeting, Dogan warned that the kidnappings were likely to adversely affect the performance of the workers still on the project. In fact, as reported in Libya Herald, seven German engineers working for Siemens, a sub-contractor to Turkish construction firm ENKA, were flown home almost immediately after the kidnappings.  The ambassador however insisted that the kidnappings would not affect Turco-Libyan relations.

Maetig assured Dogan that the PC was continuing work with security forces and southern elders to secure the release the four men. No further details of the kidnapping were released.

Normally reliable sources have told this newspaper that the three Turks have been taken to a different location from the South African engineer (originally reported to be a German national). It is unclear why the captives have been split up.