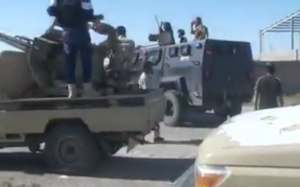 Forces under the control of Major-General Usama Juwaili, commander of the Presidency Council’s western military zone, have taken control of Aziziya, the main town in the Wirshefana district of Jafara west of Tripoli. It happened overnight following a six-day military operation in the area by Juwaili, supported by Imad Trabulsi, head of the Special Operations Force, and latterly by the Tripoli Revolutionaries Brigade of Haithem Tajouri . The latter set itself up at the Zahra Bridge on the Swani road south of the capital.

According to sources in the district, Juwaili’s men were able to move into Aziziya following a deal with Wirshefani militia commander Muammar Al-Dhawi, a lifelong friend of Juwaili. They have taken over the 4th Brigade camp in the town, previously controlled by Omar Tantoush.

It is reported that a number of “criminals” allegedly involved in kidnappings and other crimes were arrested last night, including Mohammed Bujafr Sburtu, accused of a number of abductions on the coast road. Some reports, though, say that several were able to escape in the confusion this morning as more forces arrived. The takeover was largely peaceful and the town is now said to be calm.

In a statement, Zintan Military Council said that the operation had been to show that no one was above the law. As part of that, a major checkpoint on the road into Aziziya made of containers has been dismantled.

According to the Fursan Janzur brigade, however, the coast road remains closed “for security reasons” although it says that some 60 men from the Wirshefana area as well as “mercenaries” surrendered themselves and their arms to the brigade during the day.

Also still closed is the main road between Aziziya and Gharyan. According to the mayor of Gharyan, it remains unsafe and there were clashes there this morning. People are still having to take the longer route via Esbaia, he told the Libya Herald. However, he hoped the road would reopen within 24 hours, adding: “We want the police to provide security in the area. We don’t want militias and armed forces.”

One report from Zintan claims that the 4th camp was full of pro-Qaddafi publicity material.

There have been claims that the real objective of the Juwali offensive was not to crack down on criminals, but on pro-Qaddafi forces in the area that were losing faith in Saif Al-Islam and were in the process of changing their allegiance to Khalifa Hafter and the Libyan National Army.

Assessing the implications of the developments in the Wirshefana area, Hafter today at his headquarter at Rajma outside Benghazi had talks with Brigadier Basheer Al-Najeej, the commander of the 4th Brigade, and Colonel Masoud Al-Dhawi, head of the 26th Brigade. 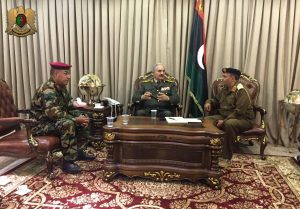