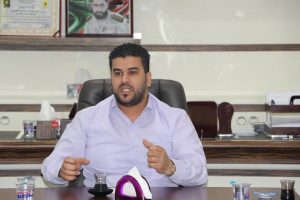 Earlier today two of Gaem’s guards were killed and five were injured when four mortar bombs hit the interior ministry building in Benghazi’s Budzira district.  Gaem himself was not hurt. Five days ago he had survived a car bomb attack on his convoy as it drove through the Sid Khalifa district.

In a ‘phone call this evening to TV station Libya 218 Gaem said that Hafter had tried to assassinate him. He gave Hafter and his sons 48 hours to leave Benghazi and hand over his command to Bukhamada.  Posts and footage also emerged this afternoon on social media, apparently from members of Gaem’s Awagir tribe, threatening to attack Hafter and his relatives.

A Saiqa Special Forces spokesman, Miloud Azawi, said after the broadcast that Saiqa would not be involved in the dispute.