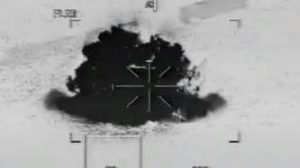 Egypt says its warplanes have destroyed a ten-vehicle convoy smuggling weapons and ammunition across its border with Libya.

In recent months, there has been a number of such reported attacks by the Egyptian air force on arms smugglers accompanied by undated video footage.  It is unclear when the latest strike took place on presumed terrorists bringing armaments into Egypt .

“The air force dealt with them and destroyed them completely and killed all the elements inside,” an army statement quoted by Reuters explained.

It is not understood how the Egyptian air force is acquiring the intelligence that has enabled it to intercept these apparent terrorist convoys. Social media footage that has been claimed to depict Egyptian army ground units near the Libyan frontier has also been posted separately by others saying that it showed Libyan National Army (LNA) border patrols.