LNA says its aircraft hit a terrorist base near Huwara 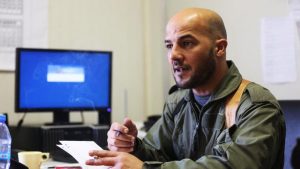 The Libyan National Army (LNA) has said its aircraft have struck a terrorist base near Hawara, east of Sirte.

Lt Col Sharif Al-Awami Air Force commander for the central region said the base had been under observation for over a week before the air attack was launched today.

He said the target was a supply hub for the so-called Islamic State which held vehicles as well as caches of fuel, water and food.

He gave no details of the effectiveness of the strike.