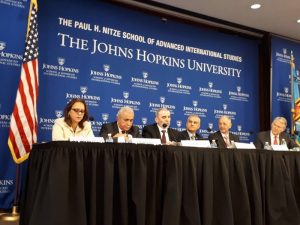 NOC chairman Sanalla announced that the NOC will open a purchasing office in Houston to facilitate purchasing estimated at US$ 20 bn (Photo: NOC).

Libya’s National Oil Corporation (NOC) Chairman Mustafa Sanalla announced in the US yesterday that his corporation will open an office in Houston, Texas, as part of its ambitious US$20 billion spending programme to restore the country’s production capacity over the next three years.

Sanalla was speaking at the Transatlantic Economic Forum, hosted by the US Chamber of Commerce and John Hopkins School of Advanced International Studies.

”The Houston office puts America’s world-class equipment manufacturers and oil field service providers at the centre of our purchasing strategy,” said Sanalla. ”And it will locate NOC’s only external office at the heart of the US oil industry. Nobody should underestimate what an important strategic choice this is for us.”

”The United States prevented the attempted illegal export of crude oil by Ibrahim Jadhran and his criminal network in March 2014. When it really counted, the US showed it is the guarantor of NOC’s integrity and the unity of the state of Libya. And the US is playing a vital role today protecting Libya’s oil industry against interruptions in supply.”

Earlier in the week during his US visit, Sanalla had discussed the key governance and security threats that need to be addressed if Libya’s natural resources are to help unify and stabilize the country.

”Libya is fixable,” he had insisted. ”We are now concentrating on achievable goals – harnessing the capacities of NOC and the other state agencies to counter blockades; stepping up anti-smuggling efforts; pushing for the reform of the Petroleum Facilities Guards; establishing employment policies that work; and, finally, and most important, since the entire Libyan population depends on it, ensuring adequate investment in Libya’s oil production.”

”These goals”, continued Sanalla, ”support the United Nations action plan and the Windsor Principles we agreed last month, the most important of which is that the exploitation of Libya’s oil and gas resources shall be for the benefit of all Libyan people, regardless of location”.

”When I meet with US manufacturers and suppliers I will insist on the design of intelligent local content, environmental protection and community relations projects â€“ it is especially important that work done by foreign companies in Libya must also provide local economic opportunities.”

”We hope next year to increase production. We hope to improve security and cut down the rate of interruptions. We hope to secure new investment. We hope a political solution will be reached. We hope to finalise and pass our new Petroleum Law. What we hope for 2018 is progress.”

During his visit to the US capital Washington DC, Sanalla had met with Senator Christopher Murphy, a member of the Senate Foreign Relations Committee, and senior officials from the National Security Council, the State Department, the Energy Department and the Department of Commerce.

It will be recalled that in July Sanalla had predicted that Libya’s oil production would hit 1.25 million barrels per day (bpd) by the end of this year and reach 1.5 million bpd by end of 2018. He had also said that he hoped that Libya should reach 2.1 million bpd within the next four or five years.

In a similar vein, Sanalla has also told Algeria’s Sonatrach that he hopes they will soon be returning with their Libyan operators Sipex to their two fields near Ghadames.

With regards to the NOC making purchases in the US of US$ 20 bn over three years at an average of US$ 6.6 bn per year, it must be recalled that in the 2017 budget, the NOC was only allocated US$ 1.2 bn by the Faiez Serraj Presidency Council /Government of National Accord. Sanalla had demanded US$ 2.5 billion back in November 2016.