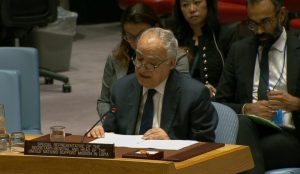 The international community should consider joint tribunals to try Libyan war crimes suspects to end the impunity with which individuals are operating UNSMIL chief Ghassan Salamé has told said the UN Security Council.

In in his second report to Salamé also called for a review of the management of Libya’s frozen assets, which he claimed was causing the country the “silent loss” of hundred of millions of dollars.

“Freezing the assets is one thing”, he said, “however, their mismanagement is another. We should revisit how Libya’s external wealth and investments are taken care of, so that they are not silently and gradually lost for future generations”.

Impunity and lawlessness continued to prevail across the country, he warned, with increasingly heinous crimes being committed every day. He cautioned that murders such as the recent killings by gunmen in Abyar and Wirshefana and the civilian dead from the Derna airstrike were shaking popular faith in the political process.  He said he was repeating his call for the Libyan authorities to investigate these incidents and hold the perpetrators to account.

“However, I cannot ignore that such events take place across the country with alarming regularity and I cannot accept that repeated calls for justice go unattended”.

He continued: “If Libyans alone cannot combat impunity for war crimes, it is time for the international community to consider mechanisms that can help them do so; possibly including joint tribunals”.

Salamé was upbeat about his action plan to bring about a political consensus on the basis of the Libyan Political Agreement (LPA).  He reported to Security Council members on the national conference planned for next February, hopefully to be held in Libya, which would adopt a new constitution and pave the way for new elections.

“I insist the conference be inclusive for all the Libyans” he said, “in order to allow the adoption of a true national charter and provide guidelines for the legislation needed to end the transition”.

He said the two Joint Drafting Committee meetings held in Tunis last month between the House of Representatives (HoR) and the State Council had made significant headway. Since their encounters, both sides had been in constant contact.

“ Though much progress was made,” he said, “a few remaining points are still to be agreed” adding, “I am quite confident we are close to a consensus”.

Salamé said that any mechanism to select a new Presidency Council and government had to be transparent and fair. “We will not tailor a process to pick particular candidates” he insisted, “and  I am pleased to report that the Libyan public has overwhelmingly welcomed this principled approach”.

He said it was to be expected that politicians should become “over excited”  about who would fill the new roles.  “But for us, what is important is the ‘How’ question. By which we mean, there must be a fair, open and competitive process”.

Salamé said that part of the action plan was the creation of a more secure and normal life for all Libyans so they could go about their lives free from fear and want. He explained that  UNSMIL was intensifying its work with armed groups towards their gradual reintegration into civilian life.

“In Tripoli,” he said,“our experts are working closely with state security forces to empower them to secure the capital more effectively.  Moreover, we continue our engagement with military leaders across the country on the future shape of Libya’s defence institutions”.

“The United Nations is working with the Ministry of Justice and other Libyan actors on initiatives, in particular reforming the appalling detention system” he said. “On migrants and refugees, despite emergency assistance, we have seen an increase in the number of people arbitrarily detained in a system with no accountability or due process.

“Migrants continue to be subjected to extreme violence, forced labour, extortion and  killings and other grave abuses inside and outside official places of detention”.

Salamé pointed up the irony that Libya, which had once been a donor to much of Africa, was now itself in dire straits, with a quarter of the population in need of humanitarian assistance.

“It is outrageous” he said,“that a country which stands upon such vast wealth has so many suffering. However, it does, and so we must assist them tackle the urgent concerns”.

Flourishing in the insecurity and lack of accountability, Libya’s shadow economy had, he said,  enabled the textbook appearance “of instant millionaires and of the extremely rapid tempo of middle class impoverishment”. Ordinary people paid the highest price for this fraud and two out of every five young people were unemployed.

Salamé noted that billions of dollars were being lost every year through illicit money transfers. The wide gap between the official and black market exchange rates enabled some to reap huge profits.

“Brokers benefit from the selling of letters of credits and cheques” he said, adding “The traffic of subsidised fuel to foreign countries robs the country of hundreds of millions every month. Other measures include the issuing of overvalued government contracts”.

The result he warned, was that Libya’s financial reserves were depleting rapidly.