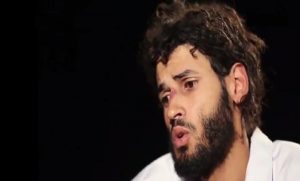 A Libyan terrorist captured in a major gun battle with Egyptian security forces has confessed on air to his membership of Ansar Al-Sharia saying he had fought with the Derna Mujahideen Shoura Council to oust IS terrorists and then against the Libyan National Army.

Abdelrahman Al-Mismari, 25, who is from Derna, was the sole survivor of 16 gunmen who were tracked down and cornered by Egyptian security forces near Wahat in western Egypt’s Giza province on 20 October. They had earlier been involved in a devastating desert ambush in which some reports say 52 police were killed in a hail of gunfire, RPGs and a series of IED explosions. Egyptian officials however, say that only 16 police died.

The attack was claimed by a group calling itself Ansar Al-Islam. The terrorist band was located and attacked by aircraft which appears to have killed or injured all of them except Mismari. 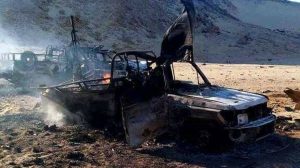 One of the terrorist vehicles after the air strike (Photo: Egyptian government)

After Mismari’s captured, security forces conducted a wave of arrests. The authorities say that  of the 29 Egyptians rounded up, 14 along with Mismari, continue to be held on suspicion of terrorist crimes.

Among the dead terrorists was Emad Hatim, said to be a senior militant figure, whom Mismari said he had met in 2015 in Derna.  Interviewed on the Egyptian TV channel, Mismari said he had been infiltrated into Egypt this January and been been part of a group of militants in the Wahat area until the October gunfight. The interior ministry in Cairo says that all of the terrorists had been trained and armed in Libya.