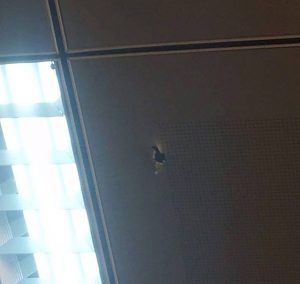 A bullet hole made in the roof of Benghazi’s Jalaa by people apparently unconcerned by the danger to others (Photo: social media)

A gunfight outside Benghazi’s Jalaa hospital overflowed into the hospital itself with at least one of the protagonists firing his weapons inside of the building.

There are no reported injuries as a result of the incident. The hospital has not produced any comment but security sources have said the gunfight arose over a personal dispute. It is unclear if any arrests have been made following the incident yesterday afternoon.

Meanwhile, yet another civilian has been injured by uncleared ordnance following the defeat of militants in the city.

Mohammed Qaidir was injured by a landmine in Suq Al-Hout. The extent of his injuries is not known. The circumstances of the blast are also unclear but the incident illustrates the inability of the Libyan National Army’s (LNA ) engineers to cope with the job of clearing the once-contested parts of the city of the remnants of war.