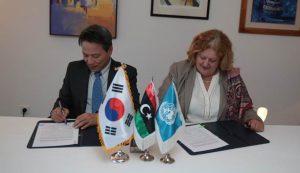 South Korea has given a further $1.5 million for reconstruction and development projects in Libya. One million of this will go to the Stabilization Facility for Libya (SFL), to which the Koreans had already given another million, while the other half million will go to support local services in Ajdabiya as part of the United Nations Development Programme’s Strengthening Local Capacities for Resilience and Recovery project.

“We were already contributing to SFL and we were able to see results,” said Korean ambassador Kim Young-Chae. “Now we are thrilled to continue our support to SFL and add more to the new project so that people in Ajdabiya also have access to health facilities, schools, electricity and water.”

A ceremony to hand over the money to the UNDP was held today at the South Korean embassy, currently operating out of Tunis.

The SFL has as a result of the latest donation almost reached its target of $40 million. The amount given now stands at $38.6 million. A month ago, France gave another $1 million and further donations are expected in the next few weeks.