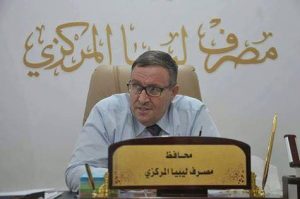 Speaking in an interview on Thursday on the Libya Alhadath TV channel, Hibri said that Kaber had ”reneged on all what they had agreed upon at their Tunis meeting to reunite the CBL and to solve the liquidity problem”.

Hibri was speaking in response to a press conference

held on Tuesday by Kaber where the Tripoli Governor blamed the Serraj-led Presidency Council for the country’s liquidity crisis. Hibri also called on the country’s parliament, the House of Representatives, to elect ”a new governor”.

He said that the CBL Board of Directors will meet soon to decide on a new Dinar exchange rate, adding that the financial state of the nation was ”fine” and challenge those who considered the new bank notes he had arranged to be printed in Russia as forged. And that what Kaber was announcing was no more than “propaganda and information.”

Hibri pointed out that he was chairman of the CBL Currency Design Committee after the 17th February Revolution, which was printed in Britain when he was in Tripoli, and with the same specifications the Beida CBL printed currency in Russia ”so how does he say they are counterfeit coins!!?”, he asked.

The Beida Governor noted that inflation was linked to the oil crisis and the dollar, adding that CBL there did not have enough money to purchase all needed goods, which pushed the CBL into printing currency. This was especially so since the share of liquidity for those living in the eastern region was no more than LD 45 per person.

On reprinting new bank notes in Russia he stressed: “We had no other option for this systematic policy”.

“The floating of the dinar needs substantial economic fundamentals and a large private sector environment,” he explained, adding that dinar floatation would be “harmful to the people,”.

With regards to solving the country’s liquidity problem, Hibri said, “a price must be set to bring money back to the banks”.

He added that “Financial corruption in the CBL is the cause of the loss of value of the dinar, not the printing of money in Russia,”. He said he was ready to accept an international accounting firm – not chosen by Kaber – to inspect the two banks. “Libya needs to print money again”, he added.

Hibri said that the policy of “import restrictions caused the price to rise”, stating that these were ”wrong policies”. He also pointed out that banks in Libya were not operating in a proper economic setting. He said that the monetary policy in Libya must be changed, because the Libyan economy was a rentier economy.

Hibri also called for a meeting of the Board of Directors of the Central Bank of Libya to change the exchange rate of the dinar against the dollar to six dinars per dollar which should be reduced gradually to an equilibrium rate of three dinars to the dollar. Its current official rate is LD 1.40 to the dollar and the black-market rate is LD 9.75 to the dollar.

The decision to change the exchange rate should have been taken earlier and change has become an urgent need to solve the country’s crises and provide liquidity to the banks, he concluded.

It will be recalled that the Tripoli-based Audit Bureau head also gave an extended TV interview in which he blamed the Tripoli CBL Governor and the Faiez Serraj-led Presidency Council / Government of National Accord.