Hundreds demonstrate in Paris against slavery in Libya 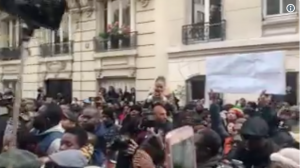 Anti-slavery protestors outside the Libyan embassy in Paris (Video grab)

Several hundred angry protestors demonstrated outside the Libyan embassy in Paris yesterday afternoon demanding an immediate end to slave trading in Libya. It followed the broadcast last week of report on slavery in Libya which included a video purportedly showing an auction of migrants being sold off as slaves in an undisclosed location in the country.

With banners saying “Non à l’esclavage en Libye” (“No to slavery in Libya”) the protestors – many from sub-Saharan Africa – tried to break through the barriers around the embassy in the 15th arrondissement (district) and force their way in. That resulted in clashes with the police who fired tear gas adter stones were thrown at them when they moved to break up the demonstration.

The demonstrators then headed off to the Champs Elysée, where they regrouped near the Arc de Triomphe. Tear gas was again used when stones were thrown once more. The demonstrators – Paris police put the number at a thousand – finally dispersed in the early evening.

The demonstration was called by the Collectif contre l’esclavage et les camps de concentration en Libye (CECCL – the Collective against Slavery and Concentration Camps in Libya), set up in Paris after the CNN video was broadcast. 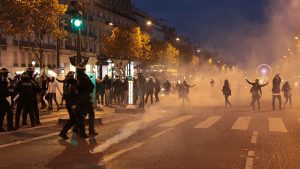