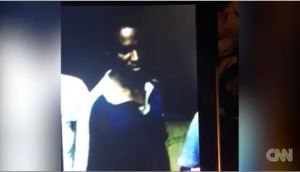 Grab from CNN video of auction of Africans outside Tripoli

Deputy Presidency Council (PC) leader Ahmed Maetig has announced that he is taking control of the inquiry into allegations that illegal migrants have been sold at auctions as slaves. In a statement, he says the investigation will lead to the arrest of those involved and of them being brought to justice.

In a separate statement, the Libyan foreign ministry says that various Libyan organisations are taking part in the inquiry.

“If the allegations are confirmed, all those involved will be prosecuted and punished,” it likewise says.

Following the PC announcement, Anas Al-Azabi of the anti-illegal immigration agency in Tripoli suggested that an investigation had already started.

Reports of illegal migrants being seized in Libya, being forced to work for no money and being sold are not new. The International Organization for Migration (IOM) has reported this on a number of occasions. The CNN documentary, however, managed to video a sale.

It has created a furore. The African Union (AU) on Friday demanded that Libya investigate the “slave markets”, and its chairman, President Alpha Condé of Guinea, damned them as a “despicable trade … from another era”.

“These modern slavery practices must end and the African Union will use all the tools at its disposal,” warned Condé, who is currently heading African Union efforts to resolve the Libyan political crisis.

Individual African governments have expressed their own anger.

Saying that he was “extremely shocked” at the reports, Niger’s President Mahamadou Issoufou has demanded that the auctions top the agenda of the Africa-European Union summit in ten days’ time in the Ivory Coast.

For its part, the Ivory Coast yesterday demanded an urgent investigation by the Libyan authorities together with and the AU, the IOM, the UN and international community to find out who has been involved in the trade.

Senegal expressed has expressed its outrage at the auctions, calling them a “blight on the conscience of humanity”.

The CNN reported migrants being sold for as little as LD 600 and showed some of them being auctioned as farm labourers.

“Does anybody need a digger? This is a digger, a big strong man, he’ll dig,” CNN showed a salesman saying, referring to a young Nigerian man.

The auctions are said to take place in Tripoli, Sabratha, Ghadames, Sebha, Gharyan, Zintan, Rajban, Kabaw and Garabulli. CNN, though, says it believes they have also taken place elsewhere.

Going on the defensive, however, the National Commission for Human Rights, yesterday condemned the CNN report.

“We express our deep resentment at the false and exaggerated information in the report published by CNN, which wrote about the open slave markets in several Libyan cities, including Tripoli,” it said, adding that “the slave trade in Libya is secret and limited”.

While it condemned crimes against African migrants in Libya “by organised criminal gangs and human traffickers” and called on public prosecutor and the interior and justice ministries to launch a full investigation into such crimes, it blamed the EU and in particular Italy for the misery of the migrants.

Similar denial has come from the head of the Tripoli-based interior ministry’s Coastal Security directorate, Colonel Tariq Shanbour. He claimed that the CNN report was part of an international campaign to denigrate Libya, itself a victim of illegal immigration.

There were those, he said, who wanted to demonstrate that Libya was a failed state and who ignored the efforts of Libyan organisations to combat illegal immigration. The media in the country, he said, had to stand with the military and ignore such reports.