two of the five detainees have been released by RADA. RADA had raided and detained over 20 people from the Comic Con event in Tripoli two weeks ago.

A source close to the Comic Con organizers arrested by the Salafi Abdelraul Kara-led RADA (Special Deterrence Force), a militia recognized by the Tripoli Ministry of Interior and aligned with the internationally-recognized Faiez Serraj-led Presidency Council / Government of National Accord – confirmed to Libya Herald that two of the event organizers have been released.

The two had been released on Saturday. The close source who asked for unanimity for fear for their safety said that ”RADA had taken them to the Attorney General’s / Public Prosecutor’s Office and tried to get him to charge them. But they were released because the AG Office could not find anything to charge them with”, the source explained.

”RADA had been promising to release them nearly every day since they were detained from the event”, they explained. ”Everyday their family members would visit RADA and ask about them and they would be told they would be released soon”, they added.

Libya Herald wanted to speak to the released two, but they declined ”saying they are afraid”, said the close source who is in direct contact with them.

The source said the three still being held ”may be charged with something” adding that it is not clear what that charge may be.

It will be recalled that the Faiez Serraj PC/GNA has come in for further criticism for ”not even lifting a finger or saying a word to try to help them”, a source close to the detained said.

Libya Herald had contacted two prominent members of the office of Faiez Serraj but received absolutely no response on the matter. UNSMIL, meanwhile, had called for the release of all those detained by RADA.

about 20 people including visitors. The detention included the 5 out of 6 members of the organizing committee that were present at the Dat Il Imad conference centre. The sixth member evaded detention fortuitously as he had briefly left the show to run an errand. He is currently in hiding in fear for his safety. The balance of the 20 people had been released quite quickly.

The organisers were ostensibly accused of a number of crimes against public morals and Islam. These included agnosticism, atheism, holding masonic ideas, believing in Halloween, distorting the minds of youth, and kufer (abandoning Islam).

They were also accused of inciting violence through some artwork which depicted knives and violent scenes. Some art work was confiscated as evidence.

The organisers had received permission from another Militia (Nawasi) which guards the Dat-Il-Imad complex of office towers on the sea front and had also signed a contract and agreed not to offend public morals. The event was visited by organizers and no objections were raised.

”Some of those who were released had received a beating, had had their head shaved bald and were given a religious lecture. We were wondering if they had beaten so badly that they left marks on them and that is why they kept postponing their release ”waiting for the marks to go”, he said.

”They were told (by RADA) that Libya was a Muslim country, not a free/liberal country”, the source explained. 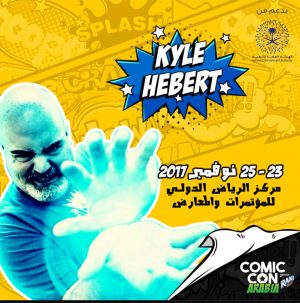 Saudi Comic Con is going ahead in the Saudi capital this week and is officially backed by the state (Social Media).

Ironically, the Kara-led Salafi RADA is inspired by a Saudi clergyman where the Saudi Comic Con is about to start in the capital Riyadh from 23-25 November. It is officially backed by the Saudi state General Entertainment Authority.