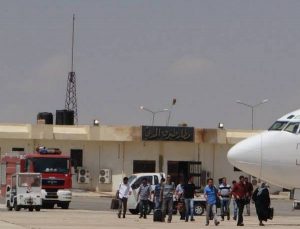 Beida premier Abdullah Thinni has ordered the suspension of all Tripoli flights to Tobruk airport following yesterday’s refusal of that airport to allow the landing on a UN plane carrying 29 House of Representatives (HoR) members from the west of the country.

They were due to take part in a key debate on the outcome of the Drafting Committee’s talks last month in Tunis between delegations from the HoR and the State Council.

Until further notice all Tobruk flights must land at Benghazi’s Benina airport. There have however been suggestions that Air Traffic Control in the east, which has been transferred to Benina since the airport reopened, may have been responsible for ordering the flight not to land in Tobruk. There has  been no statement from the UN, whose plane was bringing the HoR members from Tripoli.

The closure of Tobruk’s airport comes on top of last month’s order by armed forces commander-in-chief Khalifa Hafter closing the town’s port to all but local trade. All international shipping movements now have to pass through Benghazi port which is controlled by the Libyan National Army.