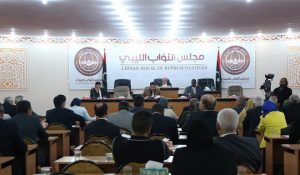 The House of Representatives in Session (Photo: HoR)

At a session in Tobruk today, the House of Representatives voted to endorse the action plan to solve the current political crisis drawn up by UN special envoy Ghassan Salamé.

Under it, there would be a new presidency council consisting of three members, each representing of the country’s three historic provinces. It would nominate a prime minister for the HoR to approve, act as commander in chief of the Libya army, and be in charge of Libya’s foreign relations.

The unanimous vote by the 79 members present (including HoR president Ageela Salameh) effectively bypasses the gridlock in the talks to amend the Libyan Political Agreement between the dialogue committees of the HoR and the State Council.

The action plan approved has several articles including statements that the Presidency Council and the government shall be headquartered in Tripoli, that the three PC members will be elected by the HoR. They and members of the government must not have a second nationality or be married to a foreigner.

The plan has also kicked into touch the contentious supplementary article no.8 of the LPA which gave the PC the right to appoint and remove top military, security and civil officials, by setting it aside for future discussion.

The session also discussed the refusal by Tobruk airport on Sunday to allow a plane carrying 29 HoR members from landing.