Clearing Benghazi of mines a priority for the UK says Millett 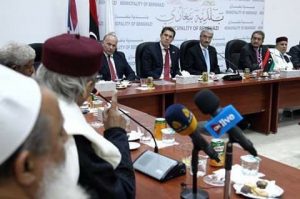 The UK is committed to helping rid Benghazi of the problems it faces with unexploded ordinance, British ambassador Peter Millett has said.

Following his visit to Benghazi yesterday and talks with its acting mayor, Millett said one of the main aims was to engage with all Libyans, insisting “we want to help”.

“We are aware that there is a perception in eastern Libya that Britain only deals with the west of Libya. That is not true. We wanted to show that,” Millett told the Libya Herald. “We are equally committed to all of Libya,” he added.

On his Twitter page Millett said he was “delighted to be in Benghazi again” as he met with the mayor and other “notables”.

He also made time to lay a wreath at the British Military Cemetery in Benghazi.

The British embassy has meanwhile announced that the UK is providing £1.2 million to help demining operations in the east of Libya. Of this, £1 million is going towards training for 60 Explosive Ordnance Disposal (EOD) operators. Forty-eight EOD operations will also be trained as paramedics able to provide emergency trauma response to those injured in Benghazi by mines, booby traps or other explosive devices. Additionally, there is support for a new mine-risk education project that startes next month and which aims to reduce the number of victims and injuries in Libya’s second city.

The need to clear it of unexploded ordinance left by Islamist militants was underlined today as a man was killed after a mine detonated as he visited his home. The 39-year-old man named locally as Ahmed was rushed to Al-Jalaa Hospital but died from shrapnel-inflicted wounds.

Millett’s Benghazi visit was, however, not without some controversy with a small group of protestors accusing the UK of meddling with Libyan affairs.

Signs held by those at the rally said the “UK government sponsors anarchy in Libya”, “Stop your dirty games” and “Keep your hands off Libya”.

The ambassador has been in Valletta today for talks with the Maltese foreign minister Carmelo Abela.