A heavy downpour of rainfall yesterday in the Greater Tripolitania region has added nearly 6 million cubic meters to the Wadi Mjenin water dam, the General Authority for Water Resources (GAWR) has reported.

Four main seasonal streams feed the Mjenin Wadi which in turn are fed by a number of other tributaries. Mjenin passes through Tripoli by Suk Il Thlat and into the Mediterranean at the beginning of the Gergarish road.

Water from the heavy rainfall has already made its way to Tripoli blocking the road in the Salah Al-Deen area where there is no bridge over the Wadi. 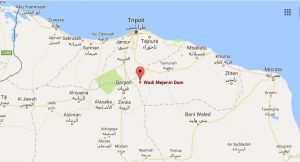 The Wadi Mjenin Dam is described technically as an embankment dam and is  located on the Wadi Mejenin itself. It is located 64 km (40 miles) south of Tripoli  in the  Jabal al Gharbi / Nefua Mountain district of Libya.

The dam was completed in 1972 during the Qaddafi era and the primary purpose of the dam is water supply for irrigation and flood control. It is also believed to replenish the underground water aquifers that supply the region’s borehole wells used widely by farms and household for their main water supply.

The average rainfall in Libya is 251 mm (9.9 inches) per year or 20.9 mm / month, with a variation between the Jabal Al-Akhdar (Green Mountains) of northern Cyrenaica and the Fezzan region and the Sahara Desert in the south. This compares to an average of 885 mm or 33.7 inches of rainfall per year in the UK.