The Beida-based interim prime minister Abdullah Al-Thinni has ordered the suspension and arrest of mayors and councillors from areas supposedly under his control who have been in contact with the Presidency Council’s government of national accord (GNA) based in Tripoli.

Thinni gave the instruction to suspend the mayors and councillors this morning to his minister of local government, and that to arrest them to his new acting interior minister, Colonel Younis Mohamed Belgassem Ismail.

The move will affect several of the municipalities in the east which have not, so far, had military governors appointed to run them. The two most prominent are Beida and Tobruk. The mayor of Beida, Ali Hussein Mohamed, has had talks with Serraj in search of funding for his town as have councillors from Tobruk. The mayor of Tobruk, Naji Maziq, studiously avoided meeting Serraj and instead sent other councillors to negotiate instead for funding for the town’s electricity and water projects, but this may not save him.

The suspension and arrest orders are likely to complicate matters in the east. The mayor in Beida, for example, is popular and his arrest could stir up local anger.

The orders are also likely to deepen the antagonisms between the east and west of the country.

“This move will not help reconciliation,” said one top local government official in Tripoli, adding that “the timing is obviously connected to the events of the past few days in Benghazi”. He was referring to the latest assassination attempt in Benghazi against the GNA’s deputy interior minister Faraj Al-Gaem, his ultimatum to Khalifa Hafter to quit the city and yesterday’s counter attempt by the LNA to seize him.

Thinni, the also official noted, was following up on the statement by Major-General Abdul Razzaq Al-Nazhuri that no one linked to the GNA would be allowed to work in the east of the country.

In a linked move, Beida’s acting interior minister has removed the head of the security directorate in Al-Abyar, accusing him of working for Gaem and of having accepted a number of military vehicles from him. It is thought, though, that the move may also linked to the discovery in the town last month of the corpses of 36 men, believed to have been militants who were allegedly tortured and summarily executed.

Thinni’s order could backfire in another way. It will show how far his sway and that of the LNA extend beyond Cyrenaica. Hafter has claimed to that the LNA controls 90 percent of the country, including places such as Zintan, Sabratha, Ghadames, Sorman and, further south, Obari and Ghat. Their municipal leaders have also been in close contact with the PC.

Zintan’s links with the LNA were already shown to be illusionary last week with the takeover by PC western region commander Usama Juwaili and his Zintani forces of the Wirshefana district. If nothing now happens to these western mayors and councillors, it will send a clear message that, despite the claims, these and other allegedly pro-LNA towns not in Cyrenaica do not follow eastern orders. 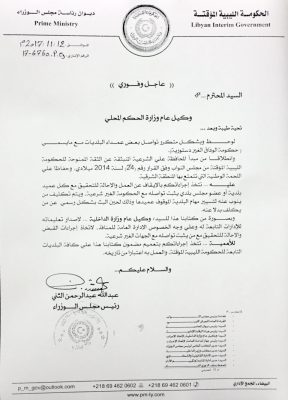