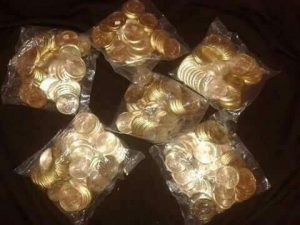 Tripoli Central Bank of Libya (CBL) governor Sadek Elkaber has said that he will not accept  the new LD1 coins that have been issued by the rival CBL in Beida.

The coins, minted in Russia for the Beida CBL, began to be distributed in the east of the country a week ago. They are designed to replace tatty one dinar notes many of which are held together with sticking tape, if they are indeed still complete.

It is unclear why Elkaber has taken this step. When the Beida CBL started issuing new diner banknotes printed for it in Russia, the Presidency Council (PC) said they would not be regarded as legal tender in the west of the country. This decision, reportedly at the prompting of the CBL in Tripoli was quickly reversed.

It is not known how many of the new one dinar coins the Beida CBL has received from the Russian mint. However, given the extremely poor condition of most of the lowest value bank notes in circulation throughout the country, the one dinar coins seem a sensible development.

Serraj in cooperation talks with Omani government and businessmen