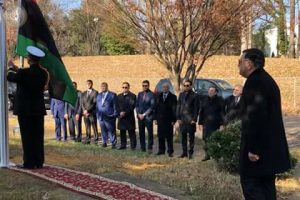 He arrived in a convoy of SUVs, surrounded by US secret service members. On his arrival he was greeted by Wafa Bugaighis, who formally became ambassador two days ago, foreign minister Mohamed Siala, head of the Presidential Guard Major-General Najmi Al-Nakua and Serraj’s senior advisor Taher El Sonni, among others.

The Libyan national anthem was then played as a soldier raised Libya’s flag.

Meanwhile, as part of his whirlwind trip to the US, Serraj and his government of national accord have been praised for their successes in the war on terror by US Senate Foreign Relations Committee chairperson Bob Corker and his deputy Ben Cardin.

On Friday night, in talks between then and Serraj it was agreed that interventions from a number of countries had helped fuel Libya’s issues. The countries were unnamed, however. Serraj also insisted that Libya was a victim of illegal migration and not a source.

Corker said he was delighted in the interest President Donald Trump had shown in Libya and welcomed further economic cooperation.