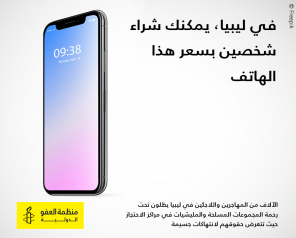 A group of 107 Libya journalists has protested that Amnesty International has been encouraging violence and hatred against Libyans with its responses to the CNN broadcast that appeared to show African migrants being sold as slaves.

The journalists have taken particular exception to a Facebook post from the human rights’ organisation (above) which said  “You can buy two people for the price of a mobile phone in Libya”.  It was published in Arabic on 24 November ahead of the African Union, European Union summit in Abidjan.

They said in a statement that as both Libyans and professional journalists and media activists who looked  for the truth, they were gravely concerned by Amnesty’s assertion.

“The poster, with its false allegations, gives an impression that the slave markets have opened in Libya”.  They continued thatm worse than this, Amnesty had not thought about the moral and material harm caused to all Libyans. They maintained that as a result of the allegations, many Libyans had been subjected to verbal and physical violence around the world. The slavery reports had increased feelings of hatred towards Libyans and Libyan interests abroad.

They said that they deplored the treatment of migrants by some criminal groups but pointed out that the migrants were not the only victims. “Even Libyans are suffering from the behaviour of these gangs.”

They added: “However, we are sure that those evil acts have not reached the level of human trafficking and the sale of migrants in slave markets”.

Libyan state institutions were making every effort to get to the truth, they said. Until now, the slavery allegations were based on no evidence except some dubious video clips.

The journalists praised Amnesty’s human rights role but said that the organisation should apologise for and withdraw its post, which, they repeated, incited violence and hatred.