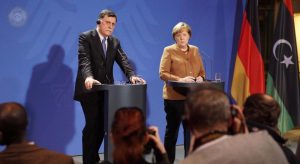 At a press conference in Berlin yesterday following talks with PC head Faiez Serraj, she said he had promised to end the “suffering of migrants” in Libya.

However, Serraj conceded that some 500,000 migrants were outside the system and that only 20,000 were accounted for in the 42 official detention centres.

“We are open to working with all regional and international organisations to end the suffering of migrants and return them to their countries,” Serraj said. He added that a PC-sanctioned report on allegations of slave trading would be published soon.

For her part, Merkel said Germany was prepared to help with the training of the Libyan coastguard and improving means of monitoring the southern borders.

Germany already announced on Monday that it would provide €120 million to improve conditions for migrants in Libya. The money, agreed the wake of the African Union-European Union summit in the Ivory Coast last week, is being given to the EU Emergency Trust Fund for Africa to help refugees and migrants in Libyan detention centres and ensure others can return to their home countries.

At yesterday’s press conference, the PC head said he has assured Merkel of his desire to unify Libya’s state institutions and to hold presidential and legislative elections next year.

He also took the opportunity to warn against the decision by the United States to relocate its Israeli embassy to Jerusalem. Warning it could lead to an escalation in conflict and tensions, he said he remained committed to the Arab peace initiative announced at a 2002 Beirut summit that approved the establishment of an international recognised Palestinian state.

Serraj also called on German companies to return to Libya to work on areas such as energy, health and infrastructure.

During his Berlin visit, Serraj attended the signing of an agreement between the state electricity company GECOL and Germany’s Siemens. According a PC media office statement this is for the construction of two new gas-fired power stations, in Tripoli and Misrata. 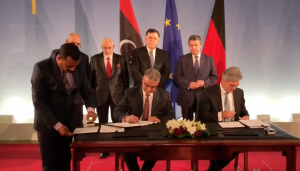 In August, the two companies signed a memorandum of understanding on Siemens’ return to Libya to complete works on a number of existing power projects.