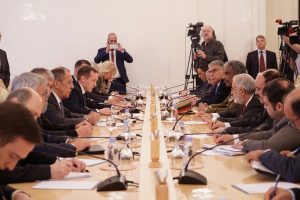 Russia is willing to help secure a solution to the Libyan crisis Russian foreign minister Sergey Lavrov has told his Libyan counterpart, Mohamed Siala, in talks today. He also announced plans to send a business mission to Libya early next year.

“We agreed to continue contacts to resume economic trade relations,” Lavrov said after the talks. “A Russian business mission is planned for Libya at the beginning of next year,” he disclosed, explaining that Russian companies wanted to return to Libya, especially those in the energy sector.

He believed that both sides in Libya were trying to find a solution under the auspices of UN envoy Ghassan Salamé, adding that Russia could see results from the discussions so far.

“The Russian Federation is ready to provide all-round support towards achieving a final arrangement. We established contacts with absolutely all political groups and tribes at the very beginning of the Libyan crisis,”  he said, repeating Moscow’s line that it still maintained relations with the two sides.

He added that once the situation had stabilised, Russia would be able to develop cooperation with Libya.

The two men also discussed the release of two Russians from the tanker Temeteron, held last year on suspicion of smuggling fuel. They are its captain and one of his officers. Another officer, a Ukrainian, is also still being held. All the other crew were released earlier this year. According to the Russians who were confident that the matter would soon be closed, Siala promised help secure their freedom.