Libya army delegation in Rome for talks with Italian military 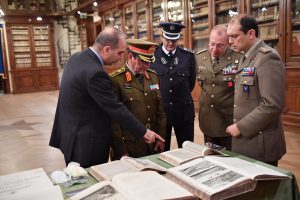 A Libyan army delegation led by Major-General Hussein Abdallah Ramadan, the former head of Libyan army ground forces under the Presidency Council (PC), has been in Italy for talks with General Riccardo Marchio, commander of Italian land forces and head of the Italian army’s operational command centre in Rome.

Ramadan has now been appointed commander of the joint operations centre being set up by the PC.

Last Monday, he attended an information briefing on the main operational and training activities in which the Italian army is involved; he was reported to be particularly interested in aspects related to command-and-control operations. He also updated the Italians on the current situation in Libya and the organisation of the Libyan army.

Before returning to Tripoli today, Ramadan visited a number of Italian army units and operations centres for briefings on their activities and was given demonstrations of training.

The chief of staff of the Libyan army under the PC, Major-General Abdulrahman Al-Tawil, was in Rome for talks with Italian counterparts, in September. Tawil was appointed by PC head Faiez Serraj at the end of August.

Ramadan arrived in Italy for his visit shortly before the head of the rival Libyan National Army, Field Marshal Khalifa Hafter also flew into Rome for talks, among others, with Italian defence minister Roberta Pinnoti.