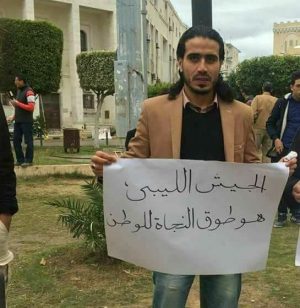 There was a mixed response to calls for demonstrations today in support of armed forces commander-in-chief Khalifa Hafter. Noisy but not huge crowds took to the streets in Benghazi, Tobruk and other eastern towns including Guba and Shahat.

They declared the Presidency Council’s mandate at an end and demanded Hafter become president. Some demonstrators also called for the winding up of the House of Representatives.

However, in Tripoli the pro-Hafter crowd numbered something around 150, despite some reports that demonstrators were there in their thousands. It began with a small protest in Algeria Square which grew as it moved on the Martyrs’ Square. At one point, though, according to one man who was present in the Martyrs’ Square,  a 4×4 Nawasi brigade vehicle entered and its occupants started firing into the air to try and disperse the demonstrators who were also protesting against Faiez Serraj and UN special envoy Ghassan Salamé. He added that one Nawasi man fired an RPG into the air, causing many of the demonstrators to flee.

One of the activists, Wissam Arab, who carried a placard saying the Libyan army was the life-preserver of the nation, was arrested by the Nawasi. It was unclear on what charge. He was later reported released.

A Benghazi activist said that people in his city were “very disappointed” at the response in the capital and elsewhere in the west of the country.

It is suggested that the Tripoli demonstration turned out to be a damp squib because many people chose to stay away fearing violence.