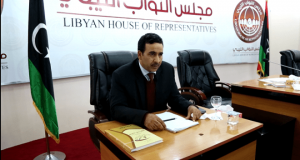 The House of Representatives (HoR) has elected Fawzi Al-Nuwairi as its new first deputy president. He replaces Emhemed Shouaib who resigned the position last weekend.

After they had earlier appointed a new governor of the Central Bank of Libya, members remained to decide on the post. Nuwairi, the member from Sorman, won in the second round of voting, taking 59 votes to 44 for Mohamed Al-Waar, from Bani Walid.