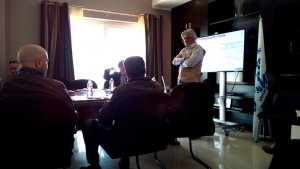 The UN refugee agency, UNHCR, said today it plans to evacuate between 5,000 and 8,000 refugees in Libya next year.

Speaking during a meeting with the press held by UNHCR at its Janzour headquarters in Tripoli, the agency’s representative to Libya, Roberto Mignone, said that during the coming month of January, it would send 1,000 of them to third countries.

Many of these would go to countries in Africa, but the agency was in contact with European states as well Canada about resettlement. Priority was being given to women, children, the elderly, the disabled those who have suffered seriously. He added that that 350 people would leave this week.

According to UNHCR, 44,306 refugees and asylum-seekers in Libya registered with it. There are also 199,458 internally displaced Libyans.

This past week, UNHCR has been organising weekly flights of refugees from Tripoli to the Nigerien capital of Niamey, which is the transit point for resettling them.