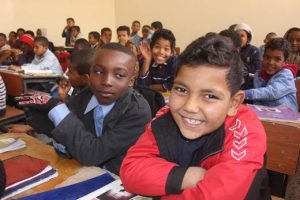 The internationally-funded Libya Stabilisation Facility (SFL) operated by UNDP has provided school furniture and supplies for five schools in the Jebel Nafusa town of Kikla. Meanwhile in Obari, it has rehabilitated three schools.

In the case of Kikla, the equipment – it includes desks, chairs, and whiteboards and other classroom items and had been requested by the local authorities – will help in the teaching of the 1,600 students enrolled in the five schools, according to local mayor Abdulaziz Muftah.

It is hoped that with improved education facilities, the significant nuber of residents currently displaced elsewhere in the country will return home

“Good learning conditions will motivate people from Kikla who are currently displaced in other towns to return to their original town, since their children can have a good education and that will ensure a better future for them,” said Mostapha Abu Draa, from the municipality’s education department.

In Obari, the rehabilitated schools were handed over to acting mayor Abou Baker Gansou on Monday. All three has been damaged a result of the fighting between Tebus and Tuaregs in the area in 2014 and then fell into further disrepair since.

SFL has a budget of $2 million for projects in Kikla and $3.9 million for Obari. So far in the case of the former, it has provided a fire engine, two ambulances, 60 desktop computers for the schools plus VSAT and solar power for internet connectivity in the district. Other projects planned in the town include the rehabilitation of Kikla General Hospital, the university and the sports centre. There is also provision for a prefabricated medical centre at the hospital.

In Obari, where SFL has a $3.9-million budget, it has already given a prefab school to the municipality, rehabilitated the Ubari General Hospital and the women’s centre, and delivered two ambulances. The SFL is now working on the reconstruction of the public market.