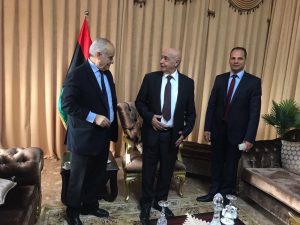 The UN Special Mission in Libya (UNSMIL) has rejected yesterday’s decision by the House of Representatives to appoint Mohamed Al-Shukri as governor of the Central Bank of Libya (CBL). It says that it contravenes Article 15 of the Libyan Political Agreement. This says that “the House of Representatives shall consult with the State Council” in order to reach a consensus on appointments to a number of posts. These conclude the governorship of the CBL.

The head of the State Council, Abdulrahman Sewehli, had already last night refused to accept the election of Shukri as did the CBL in Tripoli.

In a tweet last night Sewehli similarly rejected the HoR vote as a unilateral act that contravened the LPA’s Article 15. The HoR, he said, could not act in such a way because it derived its legitimacy from the LPA.

A statement last night from the CBL in Tripoli, unsigned but thought to be instigated by Elkaber, took the same line, likewise saying the vote went against Article 15.

The UNSMIL declaration puts it in open conflict with HoR which takes the view that the LNA is not yet in force because it has not yet voted it into law as an amendment to the 2011 Constitutional Declaration.

Ironically, until now, that was the view of UNSMIL, many foreign governments and international organisations, when they said that the LPA and the institutions emanating from it had not ceased to exist on 17 December. Their argument was that the two-year deadline in the agreement signed in Skhirat on 17 December 2015 had not been hit because the LPA was not yet in force as it had yet not been legalised by the HoR.

With the argument now on whether the LPA is operational or not, it is not clear if the subject was discussed in talks yesterday in Tobruk between UNSMIL head Ghassan Salamé and HoR president Ageela Saleh. According to an UNSMIL statement, they discussed the implementation of Salamé’s action plan and elections. There was no mention of the election a CBL governor, although it was widely reported beforehand that an HoR vote-to-appoint would take place this week.