Alfano in migrant talks with Maetig in Tripoli 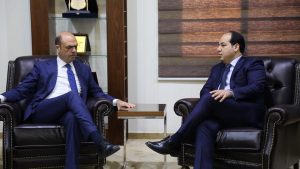 Italian foreign minister Angelino Alfano was in Tripoli today for talks with deputy Presideincy Council leader Ahmed Maetig on th issue of illegal migrants and refugees in Libya. The talks followed the arrival in Italy of 162 “vulnerable” refugees from Tripoli, the first time Italy has taken refugees from Libya.

Alfano, who presented his condolences on the death of Misrata’s mayor Mohamed Eshtewi, also reaffirmed Rome’s support for the Presidency Council and its government of national accord, expressing the hope that 2018 would see Libya’s crisis resolved. Italy, he added, wanted to help Libya advance economically.

In reply, Maetig assured the Italian foreign minister that he was sure that 2018 would see the birth of a united, reconciled and economically renewed Libya, and that parliamentary and presidential elections would take place.

Alfano also visited an Italian navy vessel in Tripoli port which is working with the Libyan coastguard.

“For the first time a humanitarian corridor has been opened from Libya to Europe,” Minniti said.

In a related development, a Libyan official has upped the number of illegal migrants in the country to 700,000. Milad Al-Saadi, media advisor to the Libyan Anti-Illegal Immigration Authority, has been quoted saying that they all wanted to cross to Europe. Earlier this month, Presidency Council leader Faiez Serraj put the figure at half a million.