Tawerghans to start returning to their town from 1 February 2018: Serraj Presidency Council 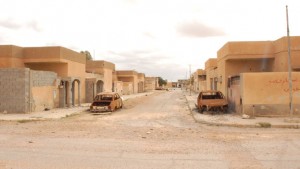 A deserted street in Tawergha (Photo: Archives from social media)

The Faiez Serraj Presidency Council (PC) announced yesterday that inhabitants of Tawergha will be able to start returning to their town as of 1st February next year.

The announcement follows the activation of an agreement reached between Tawerghans and Misrata brokered by the Serraj PC back on 19 June 2017.

It also follows on from a demonstration held by Tawerghans at the office of the Prime Minister on Saturday in calling for a return to their town. It will be recalled that the inhabitants of Tawergha have not been able to return to their town since the 2011 revolution.

Last Sunday, the National Commission for Human Rights had said that it held the PC and its Government of National Accord responsible for the suffering and tragedy of the people of Tawergha.

Meanwhile, UNSMIL welcomed the announcement saying that it ”welcomes the PC’s announcement on the return of the Tawaergha from 1 February in safety, dignity and in a spirit of reconciliation. It is time to translate a long awaited promise into reality”, it concluded.