Serraj in Istanbul for special summit on US Jerusalem recognition

Presidency Council (PC) head Faiez Serraj is in Istanbul for an ‘extraordinary summit’ of the Organisation of Islamic Cooperation (OIC) to consider the US decision to recognise Jerusalem as the capital of Israel and move its Israeli embassy there.

Serraj, who had just flown out of Washington when the President Donald Trump announced his decision , has denounced it, warning of potentially devastating consequences, as have the Beida-based interim government, the State Council and the House of Representatives. 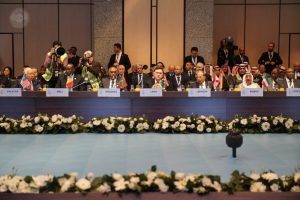 In his speech to the OIC, Serraj called for a committee to work with the US administration in order to reverse the decision.

A PC statement said a hundred scholarships would be given to Libyans to study at Al-Azhar University, where El-Tayeb was formerly president. It was also agreed that Al-Azhar would help train Libyan Imams.

Al-Azhar has also been vocal in its criticism of the US embassy move to Jerusalem.

Serraj accepted an invitation to a 17 January conference devoted to the issue, organised by Al-Azhar.

Before leaving Cairo, Serraj is also reported to have had meeting with a number of former regime officials led by Matouq Mohammed Matouq, who headed Qaddafi’s nuclear programme. The group allegedly declared their support for the PC and the Libyan Political Agreement.

Reports that Ahmed Qaddaf-Adam refused to meet Serraj have not been confirmed.

Clashes outside Mitiga but flights unaffected