Thinni government denounces US decision to move embassy to Jerusalem 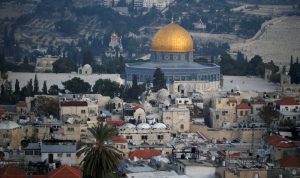 The Beida-based interim government has condemned Washington’s decision to move the US embassy in Israel from Tel Aviv to Jerusalem.

A statement by the Abdullah Al-Thinni government described it as a provocative act and “a violation of all Muslim Arabs in the world”.

Spokesman Hatim Al-Oreibi said his government feared the serious repercussions that could occur in the Middle East. He was speaking ahead of today’s announcement by US President Donald Trump that the US now recognises Jerusalem as the capital of Israel and was moving the embassy there.

Trump said the move was “long overdue” and claimed that it was help the Middle East peace process – a claim rejected by almost everyone apart from the Israelis.

The Beida government position follows that of a wide array of Arab and European countries and organisations.  These include Jordan, Turkey, the UA, Saudi Arabia, Egypt, Iraq, the Palestinian Territories, Morocco, Kuwait, Germany, France and the Arab League.

Condemnation of the move has also come from Tripoli-based grand mufti. However, there has been no comment from the Presidency Council although, given that Faiez Serraj has just left Washington following meetings with Trump and other administration officials, this is not seen as surprising.

Transitional period must finish by end of 2018, says Salamé