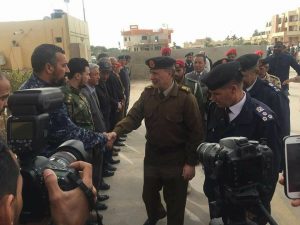 The commander of the Presidency Council’s (PC) western military zone Usama Juwaili has officially taken charge of the Ras Jedir border and its environs days after launching an offensive on the area.

Juwaili, a Zintani, visited Zuwara to meet with officials and brief his general’s. He also held talks with tribal figures from the town, who played a crucial role in negotiating a ceasefire between Juwaili and local forces after fighting broke out last Friday.

A PC statement said the takeover was intended to bolster security measures and help return a sense of stability in the area. With fuel smuggling rife in the region, the PC said it was also trying to clamp down on criminality to improve the livelihood of normal Libyans.

While Juwaili will now lead military endeavours in the area, local forces are still to play an important part, particularly in Zuwara, in an effort to integrate the various armed factions.

On Friday, he attacked the village of Abu Khamash and the fighting caused the nearby Ras Jedir border to be closed for roughly 24 hours as Libyan border officials sought refuge in Tunisia. Juwaili said the move was made to restore state control over an important area.

However, the mayor of Zuwara, Hafez Ben Sassi, accused him of attempting to seize the border from local and predominantly Amazigh forces.