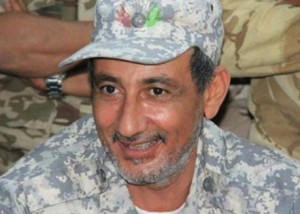 Unknown gunmen armed with an RPG attacked the home of the Presidency Council’s (PC) defence minister Mahdi Al-Bargathi yesterday, though no one was hurt.

The gunmen are reported to have also sprayed the house with bullets at around 4.30am and caused small amounts of material damage to Bargathi’s home in Janzour, Tripoli. It is believed he was at home with his family.

Video footage released by Bargathi’s bodyguards shows only limited damage to the house. The gunmen let off the RPG before fleeing. The defence minister has only recently come back into the public eye after seemingly disappearing half way through last year.

PC head Faiez Serraj suspended Bargathi following the massacre of 140 Libyan National Army troops in Brak Al-Shatti in May. Most of the forces responsible for the slaughter were operating under Barghathi’s control, although a statement by his ministry insisted he gave no orders to carry out the attack.

Last month Bargathi had his hand operated on following injuries he sustained in the 2011 revolution. Early this week he held security-based and military discussions with State Council president Abdulrahman Sewehli.