Assault on female blogger and activist Maryam Tayeb in Tripoli 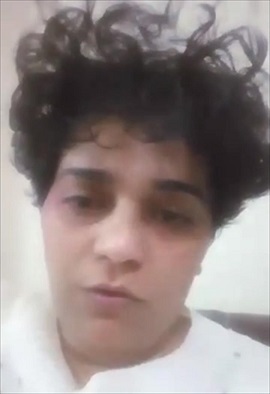 Gunmen attacked and briefly abducted social media blogger and activist Maryam Al-Tayeb, known as Dushka al-Harbi. She was forced out of her car in the middle of a  street on Thursday in the Bab al-Aziziyah area near the Alquds mosque roundabout in central Tripoli. She was taken to an unknown destination and subsequently released.

Al-Tayeb did not disclose the details of what she was subjected to, and did not name the aggressors. However, she described them as “thuwar” (revolutionaries/militias), pointing out that one of them was a demonstrator, who insulted her and accused her of taking “pills” (being on drugs) because she did not cry when she was beated. The NCHR named the militia as the Tajura Brigade.

After being released, a visibly shaken Tayeb posted a video on her Facebook page, where she recounted the story of her incident as she cried, confirming that she had recorded it after she was released and returned home.

The news of the attack on the activist Maryam Tayeb was met with condemnation on  Libyan social media. Similarly, the NCHR said in a statement that it was concerned by ‘‘the increase in the incidents of attacks and targeting of civil society activists in Benghazi and Tripoli’’, which it described as ‘‘very dangerous’’.

It called upon the Serraj Ministry of the Interior of Government of National Accord to ‘‘work to stop these crimes and violations against civil society activists in the country’’.