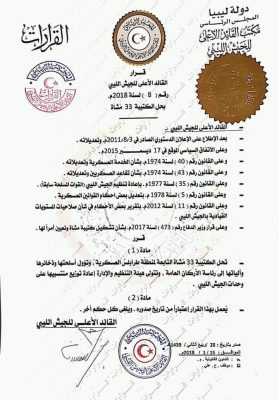 The Faiez Serraj led Presidency Council (PC) declared a local state of emergency around Tripoli’s Mitiga airport today after a coalition of militias aligned to it successfully repelled an attack on the airport compound.

Early this morning the 33rd  Infantry Brigade, a  militia recognised by the PC’s Ministry of Defence led by Bashir Khalfallah, more commonly known by his nicknamed Al-Bugra (“the cow”) attacked Mitiga with about 50 armed vehicles.

They were seeking to free some prisoners from the jail housed within the Mitiga compound. The prisoners are currently detained by the pro-PC Rada (Special Deterrence Force), which controls the area around Mitiga and the airport itself.

Small arms, heavy weapons and artillery were used by both sides in clashes that lasted for about three hours. The assailants were believed to have gained a brief entry to the compound from the rear Tajura gate.

Precise casualty figures are unclear, with some reports saying as many as 15 people had been killed and at least 37 injured. However, the fighting has now stopped and Bugra’s militia has been pushed back to the outskirts of Tajoura where they are being pursued.

Retribution has been swift by the pro-PC forces, with Rada spokesman Ahmed Ben Salem telling the Libya Herald it “was impossible to count” how many had been arrested. He added that at no time did the Bugra fighters enter Mitiga airport, though Ben Salem said three planes had been damaged.

Afriqiyah Airways announced two of its planes had been hit and that it was cancelling flights for the next three days until the situation became clearer. Some planes took advantage of the lull in fighting by taking off to seek safety elsewhere before flights were suspended. Some homes near the airport also sustained damage.

In a statement the PC decried the attack and said it was an attempt to release ‘‘terrorists…such as IS and Al-Qaeda and others’’ from detention. The others could include members of the BDB and Benghazi Shura Council. They criticised spoiler efforts to endanger the stability of Tripoli and the Libyan political transition process. The PC applauded the cohesion of the forces supporting it in responding to the threat by the Bugra militia.

Bugra, who receives backing from Tajoura, is known to support former Libya Dawn “prime minister” Khalifa Ghwell and the former LFG, and to be deeply opposed to both Rada and Haithem Tajuri. In December, Bugra launched a similar attack on Mitiga, albeit with minimal casualties.

In a later decree, the PC announced that it had dissolved Bugra’s 33rd Infantry Brigade and ordered all its equipment and ammunition be transfered to the General Staff.