RADA mourns militia deaths, thanks them for supporting its defence of Mitiga compound 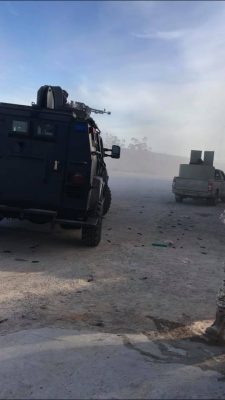 The RADA (Special Deterrence Force) revealed that the various militia forces aligned to the Faiez Serraj-led Presidency Council and its Government of National Accord (PC/GNA) suffered a total of 11 deaths. The coalition of pro PC forces were also joined by the nascent Presidential Guard, which represents the beginnings of a Libyan National army in western Libya.

RADA, led by Madkhali-Salafist Abdelraul Kara, thanked all the other 10 militias and the Presidential Guard for ‘‘standing with it with men and arms and to protect the capital from their evil saboteur and defeat the criminals.‘’

RADA listed the those that took part in Monday’s defence of Mitiga airport and the prison within the compound of the old Wheelus military base as:

It will be recalled that the inter-militia fighting led to the closure of the capital’s only operating airport and damage to at least 9 aircraft belonging to Afriqiya, Libyan Airlines, Buraq and Libyan Wings.

Praise has also been given to the pilots who braved the ongoing fighting and flew the aircraft to the safety of Misrata airport. All the airlines are now frantically attempting to assess airworthiness of their craft and fly home hundreds of Libyan passengers stranded abroad – mostly in Tunis and Istanbul.