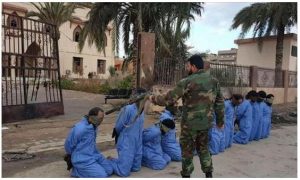 The statement comes in response to photographs circulating on social media purporting to show Warfali summarily executing ten people at the scene of the double terror bombings in front of the Salmani district mosque. The ten are allegedly BRSC and IS militants who have been blamed for the bombings.

The photograph shows ten people lined up in front of the mosque, hands tied behind their backs, blindfolded and on their knees, dressed in blue prisoner overalls with Warfali pointing a rifle at the head of one of them. Other photos show some of the ten fallen on their sides as if having been shot. There is still no official confirmation of the incident.

In the official UN statement, Guterres did not mention Warfali by name but read: ‘‘the Secretary-General condemns the double bombing in Al-Salmani district of the Libyan city of Benghazi on 24 January and deplores the loss of civilian life, including children.  The Secretary-General expresses his deepest condolences to the bereaved families and wishes the injured swift recovery’’.

The statement then added that ‘‘the Secretary-General is also alarmed by reports of summary executions being carried out in Benghazi in retaliation for the attack.

The Secretary-General reiterates that there can be no military solution to the Libyan crisis.  The perpetrators of the attack in Al-Salmani, and of any criminal acts carried out in retaliation, must be brought to justice’’, the statement concluded.

If the photographs of Warfali conducting summary executions are true, it would be further evidence that he had not been arrested by the LNA, as they had previously claimed.

It will be recalled that the International Criminal Court (ICC) had issued a warrant for the arrest of Warfali on 15 August 2017 to answer charges that he had been involved in seven incidents in which 33 bound prisoners were killed. In response, the LNA had responded by saying that the suspect had already been arrested.

However, in September last year, the supposedly-detained Warfali was linked to five fresh murders, this time in Ajdabiya. There were reports that he had been seen in the town on the Thursday and was said to be visiting LNA units in the Oil Crescent

There has been no comment from the LNA on the matter at the time of writing.