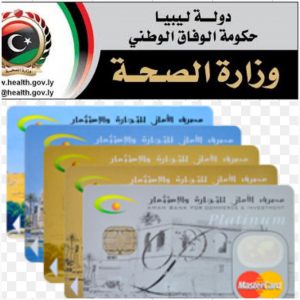 The Tripoli-based Ministry of Health has announced that it will be issuing debit cards for all officially contracted foreign health workers as of February (Archives/collage).

The Tripoli-based Ministry of Health, part of the internationally-recognized Presidency Council and Government of National Accord led by Faiez Serraj, has announced that it will issue hard-currency debit cards for all foreign health workers working for the ministry.

It also said that workers in the health sector whose presence in Libya is legal and as per regulations would also be issued with these cards.

This will be a great boost for Libya’s struggling health sector in attracting back foreign workers, the overwhelming majority of whom had fled the country since 2011 due to insecurity. The issuing of official debit cards would enable officially contracted health workers to transfer their hard currency salaries through official banks and the with the official and more favourable exchange rate.

Previously foreign health workers have had to fend for themselves by using black-market money traders to purchase hard currency and transfer their earning back home.

The MoH said that the debit cards would start to be issued in mid-February allowing foreign to initially transfer 50 percent of their earnings. It has not announced yet which bank it will be working with.