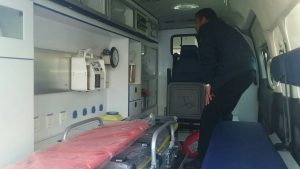 The Stabilization Fund for Libya, implemented by the UNDP, delivered ambulances to Bani Walid (Photo: UNDP).

The municipality of Bani Walid, in the west of Libya, has received three intensive care ambulances from the Stabilization Facility for Libya (SFL), led by the Government of National Accord (GNA) and implemented by the United Nations Development Programme (UNDP).

The Facility is an immediate stabilization initiative which provides quick rehabilitation of critical infrastructure aimed to help local authorities to improve their services delivery to the citizens.

During the handover ceremony that took place in Tripoli, the President of the Local Council in Bani Walid, Mr. Ali Embark Alnigrat, stated:

“All the key sectors in Bani Walid need support from the international community to start again delivering services to the community. The support that the Stabilization Facility for Libya is providing to the municipality is helping us to bring life back to the city after the armed conflict. I would like to thank all the partners involved in SFL for supporting Bani Walid.”

Bani Walid General Hospital is currently providing health services to around 100.000 people. The centre will use the ambulances to transport patients and attend emergency calls in Bani Walid and neighbouring villages.

“Starting from today, we will be able to save many lives in Bani Walid. We will transfer patients to the hospital in a quick and secure manner.”

In October 2017, representatives from civil society and public services in Bani Walid agreed on priorities for the Municipality. With a budget of US$2 million, the Facility is in the process of delivering ambulances, generators and garbage trucks to the city and will cover other health, environmental, water and sanitation, and education priorities.