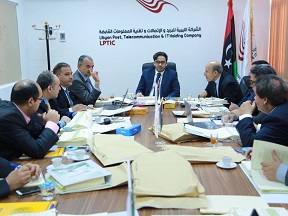 The LPTIC was able to hold its first General Assembly meetings in Tripoli sine 2014 under the unified chairmanship of Faisal Gergab (LPTIC).

The Libyan Post Telecommunications and Information Technology Company (LPTIC), the country’s state-owned IT holding company, held its first general assembly meetings for all its subsidiaries in Tripoli for the first time since 2014, LPTIC reports.

The sector had split along political lines after the 2014 Tripoli militia coup, forcing LPTIC and its chairman Faisal Gergab to relocate to Malta. A Tripoli court ruling reunified the entity under the chairmanship of Faisal Gergab in June 2017.

Despite the ruling, the reality on the ground in Tripoli is that Gergab and his team are still unable to return to their original HQ off Zawia Street in Tripoli as the building is still under the control of anti-Presidency Council/Government of National Accord militias. The LPTIC held their meetings in an alternative Tripoli location.

The LPTIC subsidiaries that held General Assembly meetings were reported as; Al-Madar, Libyana, Aljeel Aljadeed, LTT, Hatif Libya LITC, Libya Post and Albunia. The Media department told Libya Herald that this was the first time that a unified telecoms and IT sector were able to meet in Tripoli.

The LPTIC reported that the meetings were able to approve sector plans and budgets for 2018 to enable efforts to improve and develop sector services. They approved the recommencement of various stalled projects such as; the G4 project, the fibre optic project, improved postal services, Smart City project, highspeed internet and increased private sector cooperation and PPP projects.

The LPTIC promised, without giving any timelines, that it would improve services in the ailing sector.