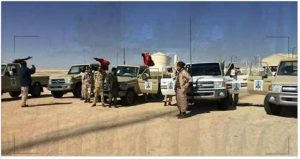 Three suspected ISIS fighters were killed by Libyan National Army (LNA) aligned forces near Waha’s Dahra oilfield on Saturday. The LNA is led by Khalifa Hafter and is aligned with the eastern-based House of Representatives.

On the other hand, the LNA-aligned forces suffered two deaths and five wounded.

On Friday, LANA reported, there were other clashes near Waha oilfields which had led to the death of two and the injury of two LNA-aligned forces.