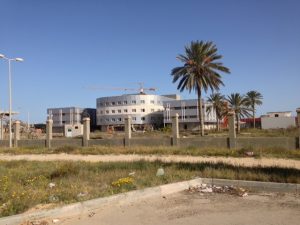 Zuwara’s unfinished hospital has been closed for 25 years (Photo: Archives).

Zuwara’s health facilities are under immense pressure with only 40 hospital beds able to support a population of some 400,000 people, officials have warned.

Exacerbating the problem was illnesses caused by pollution from nearby industrial areas, including the Italian owned Mellitah Oil and Gas Complex, the man tasked with the regions health sector told the Libya Herald.

Bassim Dahn, one of the municipalities six councillors, said Zuwara’s main hospital, holding over 400 beds, has been closed for 25 years. A Turkish company called Orhan, tasked with bringing the hospital back to life, suspended operations in 2014 over security fears, with 80% of its work done.

Due to this, the nearby ‘Seaport Hospital,’ with only 40 beds, was treating the nearby population, which Dahn said was around 400,000 people.

“The Qaddafi-era ruined the large hospital of Zuwara and we are under constant pressure to reopen it. Every government since 2011 has visited us, as have ambassadors from the EU, UN and Europe. They all say they will help us with the problem but nothing has happened,” he said.

Roughly LD30 million is required to finish the refurbishment of the hospital and another LD 70 million to buy the necessary equipment – it is completely empty.

The Ministry of Planning’s representative in Zuwara, Fawzi Effitis, said discussions had been held with the Turkish company over their return, but they needed to be paid first. “This money should really be coming from the Central Bank of Libya or the government,” he said.

“The hospital has been my number one priority since coming into office. This problem has been given no attention by all of the governments since 2011,” Zuwara’s mayor Hafez Ben Sassi said.

The sole functioning, smaller hospital is not without serious financial issues either. “Every week” doctors and administrators ask the municipality for more money, when this should come from the Ministry of Health in Tripoli.

“With the current functioning hospital there are two main issues. Firstly we do not get enough medicine, equipment etc from the government. They should also be helping us with funding the refurbishment of the main, central hospital too,” Dahn explained.

Secondly, was the claim the hospital served 400,000 people from the region, including sometimes Sabratha, Zawia and areas to the south. With Zuwara the last major population centre on the road to Tunisia, Dahn said overexcited drivers crashed on the highway many days of the week. Typically their injuries were serious and life-threatening too.

“Ultimately, we are under such great pressure and have to send people to Tunis and Tripoli. Patients often die on the way. We need more help and are on our own. The (Presidency Council’s) government gives us 10-15% of the finances needed for health and my department are the ‘lucky’ ones – electricity, infrastructure gets nothing,” he added.

Dahn also lamented the effects of nearby factories and the damage their toxic waste had caused. The Melittah Oil and Gas complex owned by the Italian state energy company ENI was blamed for its lack of transparency.

“I am not sure what exact pollution is caused by Melittah, but the administration there has not told us what chemicals the complex gives off. Zuwara municipality has unusually high levels of cancer and miscarriages. We do know lots of hydrogen sulphate comes from Melittah and this has certainly played a huge part,” he said.

“In some parts of Libya if they are unhappy with oil installations, force is used to send a message. However, in our culture we do not do this and prefer to use peaceful, legal ways to sort out problems,” Ben Sassi said.

When the Italian ambassador recently visited Zuwara, the issue was raised with him but officials said they were dubious if anything would come from this.

The disused, Qaddafi-era Abu Kammesh plant was also held liable. Closed since 2009, among other things it produced large amounts of PVC, salt and industrial chemicals. Nearby residents are understood to have particularly high readings of mercury in the blood and nearby soil is heavily polluted. It has also given off mega methanol, a downstream petrochemical.

Dahn, accompanied by the economy minister, has held talks in Milan with a Bulgarian company who offered to take over Abu Kammash and thoroughly clean it. It will produce similar products as before but Dahn insisted there would be much tighter protocols to prevent further pollution.

“Ultimately we need professional, independent advice on what to do next,” he said.