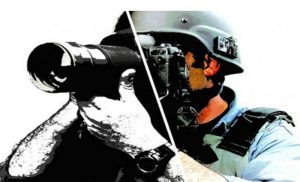 On the eve of the seventh anniversary of Libya’s 17th February Revolution, Reporters Without Borders (RSF) has condemned the impunity for violence against journalists in Libya forcing them to flee abroad since 2014. The political and military split between the west and east of Libya has made journalistic independence impossible and turned them into targets, RSF said in a statement.

The full statement read as follows:

‘‘The crisis for press freedom in Libya has reached an unprecedented level seven years after the country’s revolution. The open conflict between two rival governments has made journalism extremely dangerous. Reporters Without Borders (RSF) condemns the impunity for violence against journalists, who continue to flee abroad.

The press freedom that began to develop in 2011 has been obliterated since then by political conflict and violence. The state has been torn apart by the power struggle between two rival factions, one in the west and one in the east, a fight that has made journalistic independence impossible and has turned journalists in targets.

At least 18 journalists have been killed since the revolution. The two main military factions undermining the state since 2014 are “Al Karama” in Benghazi and “Fajr Libya” in Tripoli. News reporting has become virtually impossible because of the political polarization. Silencing journalists is a permanent goal for the many militias in both factions and their commanders.

In these circumstances and given the prevailing impunity for violence, journalists often have no choice but to flee abroad. Libya has been steadily losing its journalists and media outlets. According to RSF’s tally, 67 journalists have fled the country and eight Libyan media outlets are now operating from bases in other Middle Eastern countries.

RSF has also registered many cases of disappearances, abduction and torture, especially this year. In most of these cases, the terrorized victims or their families did not want to be identified.

Annabaa TV stopped broadcasting on 15 March 2017 when its Tripoli suburb headquarters were set on fire by one of western Libya’s militias. This militia also obtained a list of the TV channel’s employees and posted it online. The publication of the list – giving their full names, the department where they worked and their salaries – triggered a wave online hate comments against the TV channel’s journalists, who were suddenly very exposed.

RSF and the Libyan Centre for Freedom of Press (LCFP) set up a crisis unit with the aim of assisting Annabaa TV’s journalists and, if necessary, helping them to leave Libya to guarantee their safety. Since then, 40 requests for help have been received by the crisis unit, and assistance has been provided to the 13 journalists most in danger, who were able to move to Tunisia and subsequently move again to Turkey to resume working for Annabaa TV after it relocated there.

“The situation for journalists and media in Libya is untenable,” RSF said. “The country is haemorrhaging journalists, who prefer to go into exile in order to continue reporting or chose to stop all journalistic activity because it has become too dangerous. Those who decide to stay are trapped and must choose between the rival factions. Media freedom and independence is nonetheless crucial for democracy and the rule of law.”

The months that followed Muammar Gaddafi’s overthrow in 2011 saw the emergence of new media that displayed incredible energy and enthusiasm, but the enthusiasm was unable to resist the ensuing political instability and violence. The crimes against press freedom have been ignored and the perpetrators have enjoyed complete impunity.

A constitution that guarantees press freedom, the confidentiality of journalists’ sources and the safety of journalists would sent a powerful message to all those who violate media freedom every day, a message that would help combat the prevailing impunity for crimes of violence against journalists.