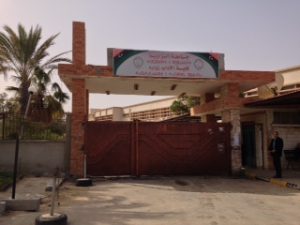 There is a growing number of students studying the Amazigh language, Tamazigh, in Zuwara at the local University (Photo: Jamie Prentis, Libya Herald).

Previously denied a chance to study their own culture, the number of students pursuing Tamazight higher education courses in Zuwara is growing.

There are currently 22 people studying at the Amazigh department at the Zuwara branch of the University of Zawia. Around 40 are expected to be enrolled for the next academic year.

“During Qaddafi we could not study our language. Even before 2011 I wanted to learn more, but it was illegal. Now I can and I want to do it to support my people,” said Ayyad Baqoush.

A 52-year-old accountant, he was one of many that were older than the typical university student. All of the 42 schools in Zuwara teach Tamazight three times a week up until the age of 12. Yet locals said that while most spoke the language fluently, there was not enough of a focus on the written form.

In the Amazigh department at the university there are three teachers, with two coming from Algeria. All were educated to masters level abroad.

“One of our priorities is to make teachers better so they can pass their knowledge down and improve quality,” said the head of the department Naff Maldi.

“But we need to spread awareness and so should the university and schools. This is our culture, we should be proud,” he added.

Many of Libya’s Amazigh feel underrepresented in government and Zuwara has previously not put forward a candidate for the House of Representatives in protest.

“It’s disrespectful to ignore our existence. It won’t affect my department, the quality control is high. But it does hurt us on a mental level. It makes an emotional impact on our hearts,” Maldi said.

“For the future of our society we need to keep these classes alive, but the government has done nothing to help us,” said Dr Abdullah Kabousa, a member of Zuwara municipality.

“I ask that they take care of our culture. I want to teach my children about our society and culture. It was demolished by Qaddafi but now we have a chance to keep hold of it,” he added.